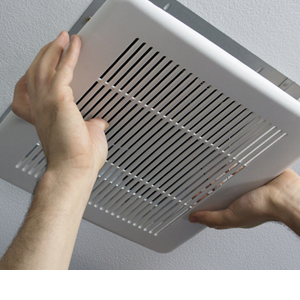 Exhaust fans are found in most residences and many commercial properties to help prevent steamed up mirrors, damp walls, and fogged windows as well as to remove odors. However, they can also present a potential fire hazard if not cleaned and maintained on a regular basis. Fans, over time, build up lint which can cause the motor to overheat and ignite the lint, plastic fan blades, and the nearby combustible wood structure. The speed at which the lint builds up depends on the amount of use and the amount of particulate in the air in which it operates.

These fans are not designed to last forever, and many are original installs. Older exhaust fans are not thermally protected. Thermal protection causes the motor to shut off should it seize and overheat. This safety feature has been available since the late 1970s, but was not widely used until the early 1990s. If you have a bathroom exhaust fan in your home, clean it twice a year.  If it starts to make noises or smells odd, it’s time to replace it.

Action Steps You Can Take: